The Bridge Mark and other City of London related topics 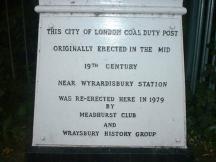 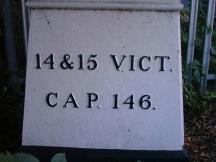 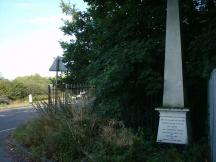 The Bridge Mark - seen in 2009
I need to add this stained glass window in Guildhall.
Blackfriars Bridge 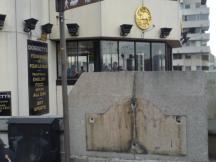 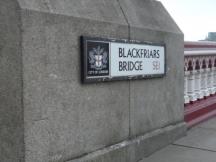 Cannot find the Bridge Mark. Have a bench mark instead 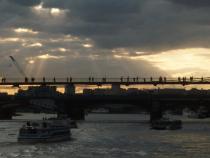 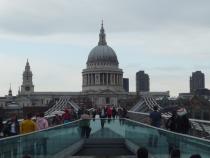 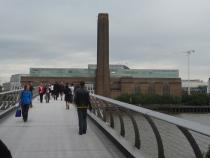 No sign of the Bridge Mark seen anywhere
Southwark Bridge 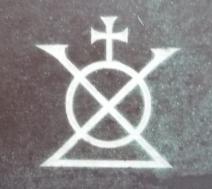 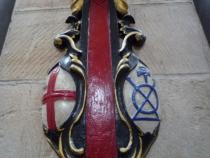 See also a few sword rests still in situ and this description of sword rests. 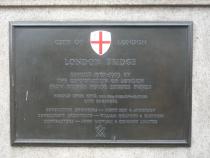 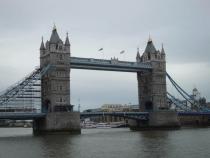 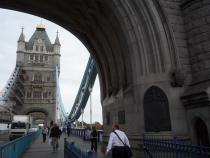 Wallyg's photo of a matching plaque put up an hundred years later - has good write-up about the bridge. 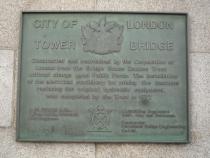 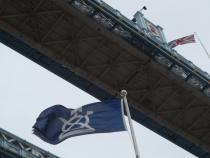 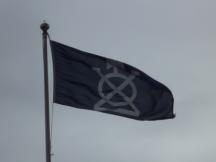 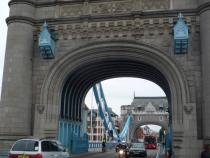 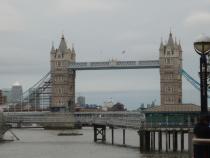 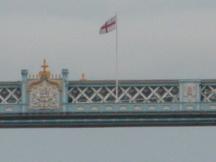 Miles from the river 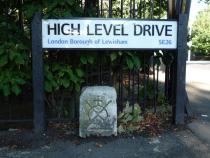 At TQ 3432 7149 at the junction with Westwood Hill. For more details see this image at geograph.org.uk.
St Clement Eastcheap
Alice was driving the family Rolls Royce and was giving Brenda a lift. As Brenda got into the car she found two golf tees on the passenger seat. Not recognising them, she asked "what are these"? Alice replied, "they are for my husband to rest his balls on when he is driving". Brenda responded, "gosh, Rolls Royce think of everything".

In similar vein, if Brenda asked what the thing shown below is, Alice would reply: "it is for the Lord Mayor of London to rest his sword on when he is praying".
Sword rest

See this description of sword rests. This specimen is in the Church of St Clement Eastcheap. It is still in place in this photograph (on the left) and in this photograph (on the right) but every year since 1998 we have removed it before our mystery play performances so that it does not obstruct the audience's view. See also a few sword rests still in situ including the one in Southark Cathedral above. Just above the City shield is an horizontal ring. The tip of the sword is inserted upwards through this ring, then the handle is rested on the dished plate at the bottom.
Dakin
Below the City shield is a coat of arms which bears the motto "Strike Dakin strike". Asking Google about the motto, we find Kelly's Directory for Derbyshire, 1891 which tells us that in St Peter's Church Fairfield there is a mural tablet to William Dakin, a merchant of London (1848) with the singular motto of that family, "Strike, Dakin, strike; the Devil's in the Hemp". (Here the punctuation gives an indication of who is supposed to be striking whom!) The church's website does not mention the tablet but tells of two other Dakins in the graveyard.

In fact the rest was probably presented to the church by Thomas Dakin (1808-1889) who was a Lord Mayor. This page (cached copy) on Deakins of Australia and England gives a good explanation of what the motto means.

Another Google hit comes from an unlikely source: small town Minnesota, in this article (cached copy) from the Kanabec County Times about someone being busted with $1000 dollars worth of pot [= Cannabis = hemp]. It definitely must be small town because the story has generated forty eight comments! One of these (search text for Dakin) is from someone who still has the family motto word perfect after seven generations.
Kendal

Sword rest and pew in Holy Trinity Church, Kendal, Westmorland. (Copied from this geograph page © Copyright John Salmon and licensed for reuse under this Creative Commons Licence.) I find to my surprise that I first saw a sword rest fifty years ago (although I was not introduced to it at the time) when I took part in Kendal Grammar School activities held in the Parish Church. I do not need an high resolution version of the image to tell me that the motto under this shield is pannus mihi panis meaning wool [literally cloth] is my bread.
$_COOKIE['vpt_dims']=×,  $_COOKIE['pathome']=,  $_COOKIE['em2px']=14 - more / less space for descriptions
Bridge House Estates article in Wikipedia | Coal Tax Posts - the other City logo | RWH galleries on this site | RWH holiday snaps | RWH home